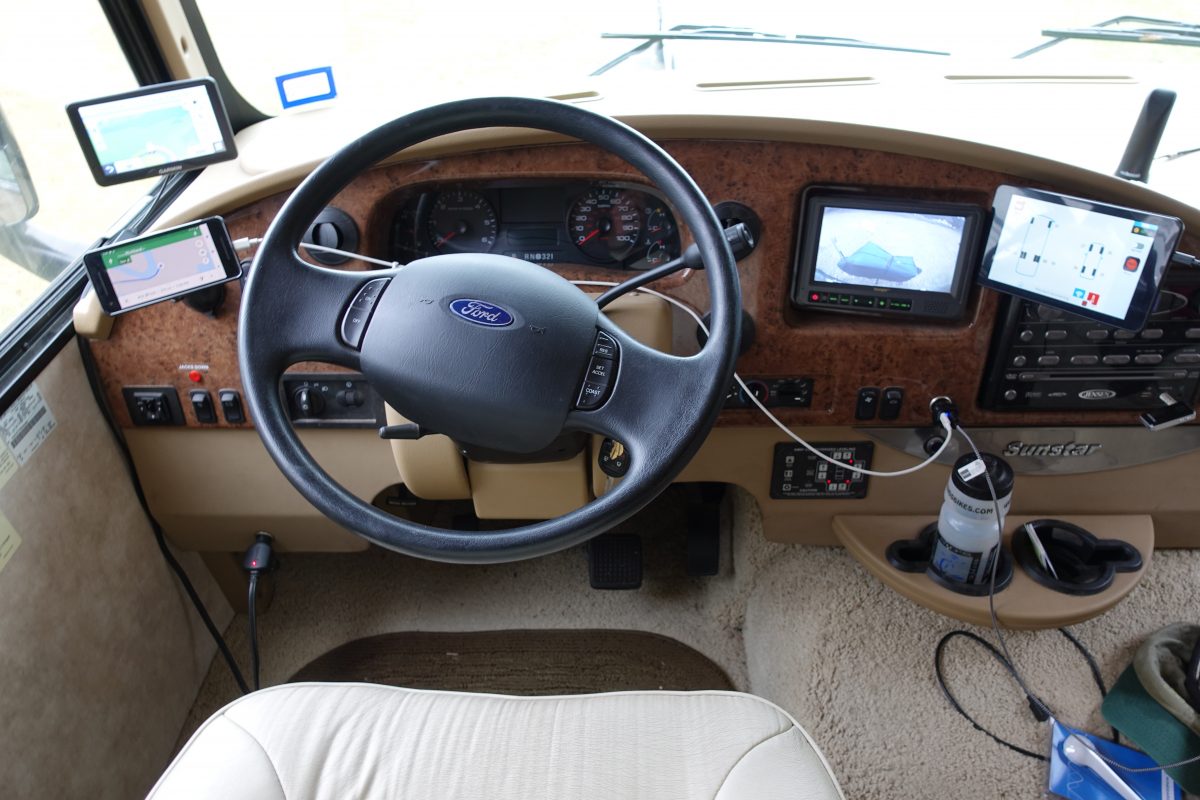 It’s been a good while since my last blog post. I left Colorado the middle of September and since then I’ve traveled nearly 5,000 miles. Since leaving New England on November 14 of last year, I’ve driven the motorhome with the car in tow almost 15,000 miles. And all of that driving has been solo. 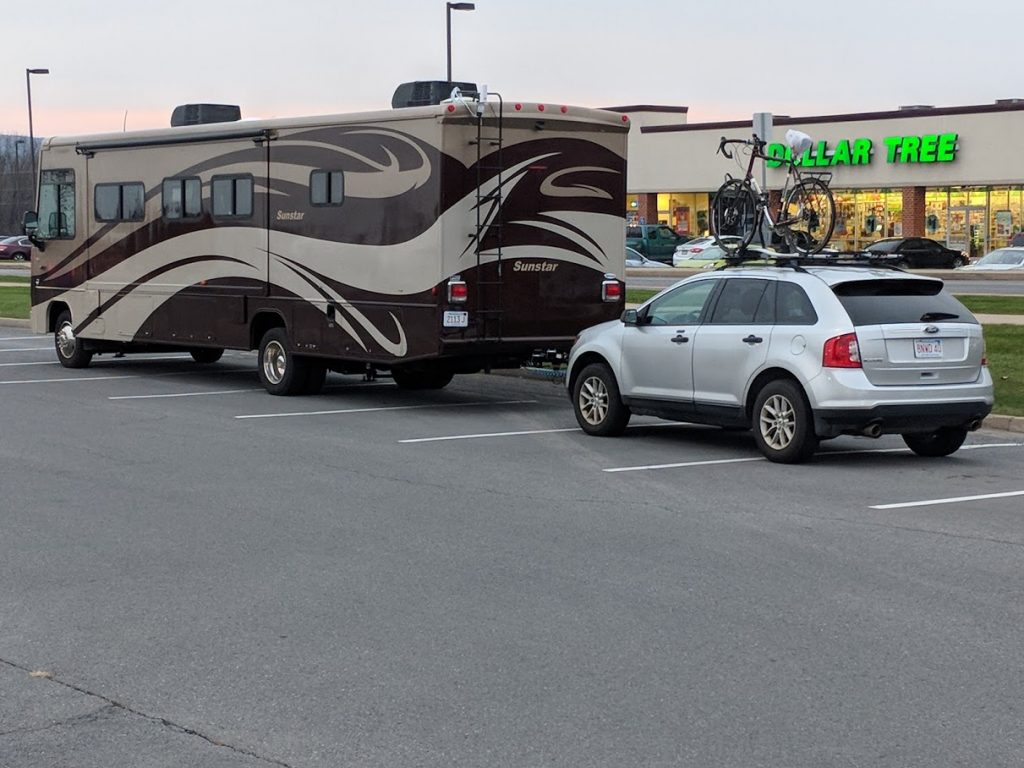 The two specific things I need to be aware of when driving are low clearances under bridges or in tunnels, and weight ratings on bridges.

I long ago trained myself to always see and read clearance signs, and anything less than 13′ sets off mental alarm bells in my head. I never want to be featured on YouTube smashing into the 11′ 8″ bridge!

In practice the weight limits only come into play on the most minor roads, and have only been an issue once. I’ll get to that later.

So what does all this have to do with navigation? Well, with the motorhome navigation is more than just finding the quickest way or the shortest way or the most scenic way from Point A to Point B. It’s also finding the route where the roads are comfortable driving a large vehicle and where I won’t be stopped by any low clearances or weight restrictions.

Then there are special situations like tunnels I am not allowed through because I have propane on board. There’s the Baltimore Harbor tunnel on I-95, all of the Boston tunnels, and the lower level of the George Washington Bridge in New York. And on the east coast there are parkways that are open to passenger cars only and from which I am excluded. In Connecticut there’s the Merritt Parkway. In New York I am allowed on thruways but not on parkways.  Then there’s the Garden State Parkway in New Jersey, where there are weight restrictions on vehicles north of Exit 105.

And on the east coast I also think about tolls. If I were to cross the George Washington Bridge without an EZ-Pass, the toll would be $84. With my EZ-Pass, at off-peak hours it’s only $68.

And finally, one more thing to think about: where am I going to get gas along the way? My motorhome is a “gasser,” as it has a gas engine. So I need to pull up to the gas pumps, not the diesel pumps designed for large trucks. And I can’t use just any gas station I see along the way. There needs to be enough room for me to maneuver, which involves the orientation of the pumps as well as the approach to and exit from them. One of my rules for driving this thing is never to pull into any place where I can’t see how I am going to exit out.

Fortunately, we live in a high tech world. Google Maps and in particular satellite view makes it possible for me to locate a gas station and look at the approach to and exit from the pumps. And sometimes if I can’t figure out the pump orientation because they are under a canopy, Street View will give me a look. So I will note exactly how I will enter the station and which pump lane I need to use, all while still hundreds of miles away.

My default while traveling the interstates is to look for a Flying J or Pilot with RV lanes. They are easy to find using the MyPilot app on my phone, and I get a 3 cent discount on the gas price using my loyalty card. I can also usually get my propane tank refilled if needed, and they often have free fresh water so I can refill my fresh tank.

Whew! All of this and we haven’t really got to navigating yet! So you might have realized by now that there’s more to getting my rolling house from here to there than searching for the destination on Google Maps and clicking START. Google doesn’t know what I’m driving and will happily route me on roads where I can’t go. So I have an RV specific GPS made by Garmin. This GPS allows me to make a profile that includes the height, width, length and weight of the RV, and attempts to route me in a way that avoids any clearance or weight rating issues. It’s not perfect by any means. Not every bridge and overpass is in its database, and if it doesn’t know about something, it can’t route me around it. And as you might imagine, it has a very strong preference for the interstate highways. So much so that it sometimes comes up with some really crazy routing. I remember being 7 miles from a state park campground I was heading to just off the Natchez Trace Parkway and the Garmin was giving me a route that was 35 miles long. And last month when I was heading for Big Meadows Campground in Shenandoah National Park, it simply refused to route me onto Skyline Drive, even though that is the only way to get to the campground.

As you can see, I can’t rely on just Google Maps. And I can’t rely just on my Garmin. So I use both. And neither of them tell me about things like propane restrictions or which gas stations I can get in and out of, so there’s always a bit of research I need to do before hitting the road. 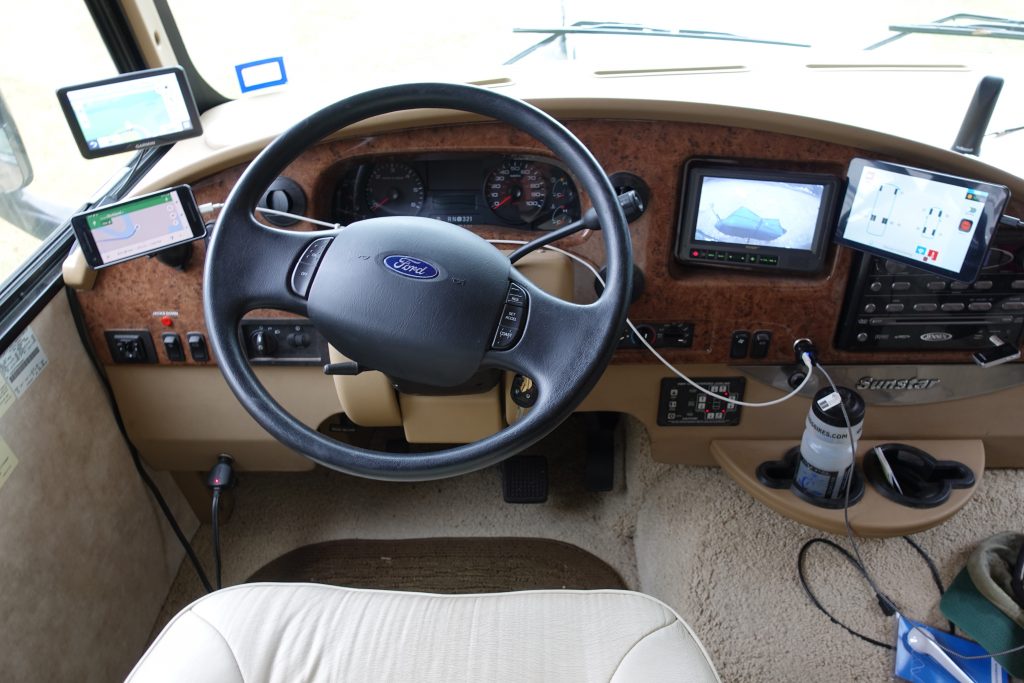 Here’s what the cockpit of the AdventureMobile looks like going down the road. To the left are the two GPS’s, and to the right is the backup camera and the tablet that monitors the brake system in the towed car — AKA “the toad” — as well as monitoring the tire pressure monitoring system (TPMS).

Google Maps usually comes up with a shorter route, and often I’ll follow it. Usually it pays off, but not always. When I was heading to Lake Fausse Pointe State Park in Louisiana the Google Maps route was 30 miles shorter than the Garmin route. Just after crossing the Atchafalaya River it took me off the highway and onto a parish route following the levee south. As soon as I got on this road I had a bad feeling. The road was really narrow with no shoulder. But there was no place to turn around. Some of the side roads were nothing more than tire tracks through the grass. So I pushed on. I continued on for a number of miles until the road made a 90 degree turn and there was a sign warning of a bridge ahead with a 5 ton weight limit and 9′ 6″ clearance. Well I’m more than twice the weight limit and 3 feet taller than the clearance. Crap! Fortunately there was a gravel lot right on this corner and I managed to get turned around in there and retraced those miles back to the interstate where I followed the longer Garmin route the rest of the way to the park.

I hiked the Window Trail this morning. A little busy for my taste, but it's a classic Big Bend hike so I had to do it ... See MoreSee Less

New Year, New Life? In my last post, back in September, I talked about my yearning to settle down. As it turns out, that wasn’t just idle talk. I’ve slowly come to realize my discontent with nomad...
View on Facebook
· Share

Half the park was socked in with a heavy fog this morning, and half was bright and sunny. I drove from the foggy side to the sunny side for a nice little hike up to Ward Spring and back. ... See MoreSee Less

I went grocery shopping today. 146 miles each way, 292 miles round-trip. It really sucks if you get home and realize you forgot to get the milk! ... See MoreSee Less